Alqua Kalina's interperetation of Zaabo, whom for a while was the USS Freedom's "unofficial mascot."

With his cat ears and doglike tail, no one knew what sapient race he was, not even him. 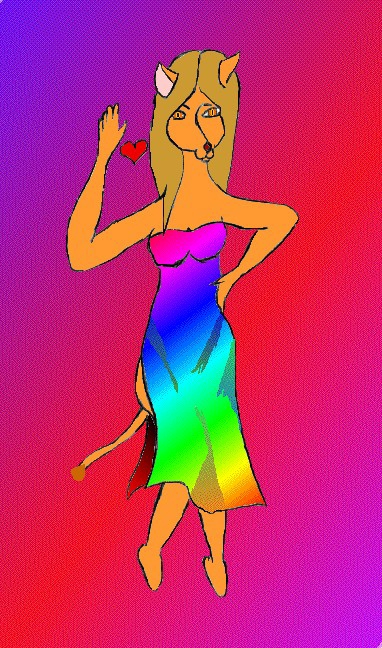 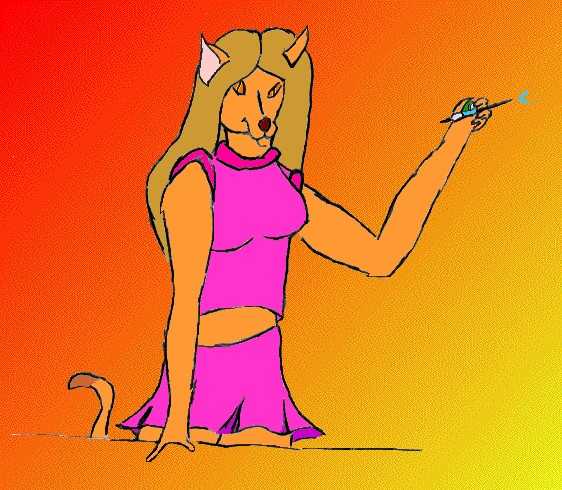 More artwork of K'Lynxyl, by "Sailor Poison " Here, the Inspector does nurse duty.

"Um, WHERE is that needle going?! I thought Starfleet used hyposprayers! Noooooooooo...... " 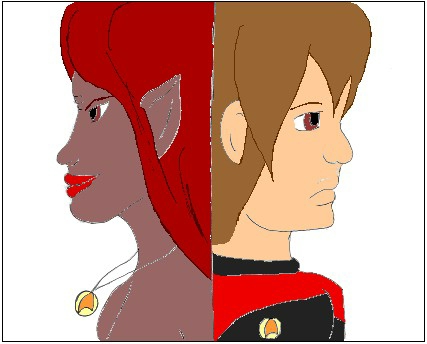 In her words, "Lera's happy 'cause she's 'getting some,' and Lee's not, because he's not."

Lee would dispute the latter, considering his nature and that of the ship. 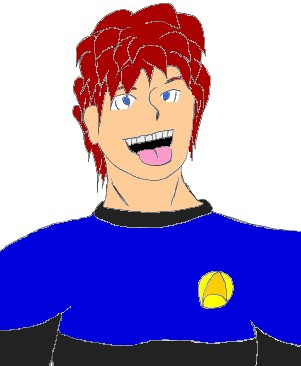 Character art of Martin, one of the USS Freedom's doctors, by "Sailor Poison ."

Many women continued to use the EMH durring his time on the ship, for some strange reason.

"Sailor Poison's " idea of how Lera's pursuit of Captain Lee ought to turn out, considering the nature of most human males.

Captain Lee may be closer to Kirk's age in the famous captain's prime, but he's more like Piccard when it comes to women chasing after him. So this would probably be seen only in the Freedom's holodeck.

When Inspector K'Lynxyl showed up, Alqua Kalina was kind enough to do some fanart for her, this being the first one. 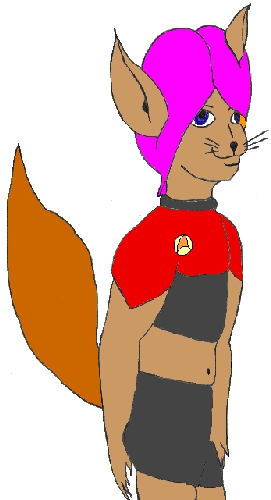 Obviously, he had a little fun with sicissors. 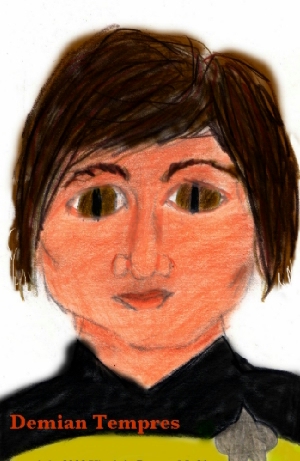 Virginia McCluney did this artwotk of Demian Tempres, the USS Freedom's Chief Engineer.

Demian is humanoid with catlike eyes. But his behavior seldom has him landing on his feet.

Alqua Kalina did this cheesy-cake picture after hearing about events in the USS Freedom sim in August 2002. K'Lynxyl and Lera had gotten kidnapped by the Ferrengi, but not before Lera had gotten sloshed with water from the springs of Planet Junkeskyo (sp).

And since the Ferrengi prefer women on their ships to be "in the buff ... "

Well, that's normal for Lera. ;-) But what isn't normal is the effects of the Junk water on her ...

"My, what big teeth you have Lera."

Alqua did one more pic, wondering if this would be what color Lera would prefer her Junkeskyo from to be, given her love of all things charteause (may not show in all browsers).

"Sailor Poison " did this picture of Lera and K'Lynxyl, demonstrating their affections for the Captian in an, unusual fashion (may not show on all browsers).

Another peice of cheesecake from Alqua Kalina. This one's a twist from an unofficial "holodeck-sim" Alqua heard about where K'lynxyl got the Captian to relax. But what if she had been a little more 'forward,' not to mention the effects of her Kzin genes while she's acting as 'wet nurse' for three of the babies on the Freedom ...

Some people would also look pretty shocked if in his position, but only for one reason ...

Since Lera keeps asking for naked pictures of her, Alqua Kalina went ahead and drew one.

So click on the image to see Lera in all her glory ...

USS Freedom Christmas Art by Alqua Kalina. Milton Dammers gets a little more than he bargined for in his stocking.

From her expression, one would think she's eyeing a Christmas feast before eating it up. For the stocking's owner, this could get either very scary or very fun (perhaps both).