Mark Stanley, the artist who does the online sci-fi comic Freefall , did this cameo of Murray Lee's USS Freedom character, Maxwell. "Right in one of the rare doublestrips and when a particuarly nagging question in the story gets answered too." 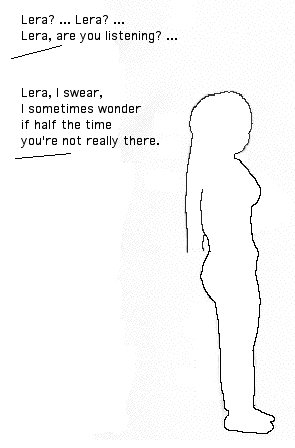 A little commentary by Murray Lee about Lera's participation at times lately in the sim. Done as part of his site reaching the 25,000 mark.

"Mind you, all this guy needs is a mini mustach for the Hitler effect."

"Those must be dark circles over the eyes from lack of sleep - hence why he's glad to have his coffee."

Another cartoonish pic from "Skylioness"

In response to finding out about Lera's Theme Song , "Skylioness" did this parody pic. 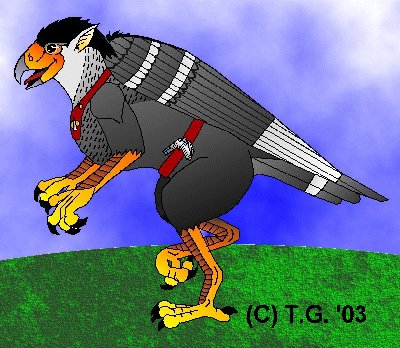 Murray Lee's depiction of the largest and the smallest of the Freedom crew, Tarra and Lera.

On seeing the original sketch, Alqua Kalina thought it had much to be desired, "the hands are too small, the hips are too narrow, the tail looks like it's sticking out of her ... , the (breasts) aren't right ... " At least he thought the ears and the height-ratio were okay.

The player behind Tarra, however, loved it - "I wonder what has the runty Romulan upset ... ;) " 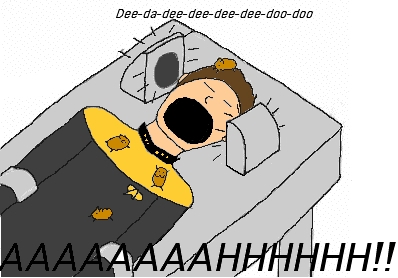 A picture of Demian while being "hamsterfied" by the evil Dr. Hojo. during the time the Freedom was at New California, by Murray Lee.

Dem and his phobia of small rodents, Hell for him, hilarity for us.

Another picture of K'lynxyl, courtesy of Alqua Kalina . Here, the good doctor has a special dress just for Dammers.

The special dress at a different angle, from Alqua Kalina ( PG ).

A picture from Alqua Kalina that somehow didn't get put up here at first. Here, K'Lynxyl shows off her holographic dress. Unfortunetly, if you move too fast ... you better wear at least something underneath.

Another picture late getting here from Alqua Kalina . This one has K'Lynxyl dealing with warm temperatures in a simple manner when off-duty without taking the "Lera option."

Murray Lee's shameless self-promotion "contribution to a 'roast' for Freighter Tails comic artist Bill Redfern. Here, Mizzkiti transfers to the USS Freedom due to the Pharsicle unable to go any further.

"She thinks she's getting away from the wackiest crew around. Little does she know ... " 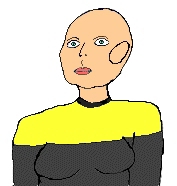 Murray Lee's rendition of Engineer's Assistant Tadtasi, "not very good ... As I didn't know of any pictures of Tiburons, this was a guestimate of the caulflower ears."

Lera is always asking for naked pictures of her. Murray Lee did one of her as promised when his site hit ten thousand, but some (Lera included) were disappointed as there was a sign blocking the view. So Murray promised to do a "topless" picture of Lera with nothing in the way and sumbit it when his site hit 20,000.

As you can see, he found a way to keep his word and still stay within decency standards ...

(character art) An image of Engineer's Assistant Lott Tadtasi, created by the player behind the character, through "heromachine."