(PG) Another pic from Murray Lee, "When I offered to Lera to do another picture of her, she wanted her character to be nude, again, with nothing covering her up but a guy's hands."

It's a bit late for Halloween. Would Char Riit consider it a Thanksgiving picture?

PG More artwork from "Sailor Poison," who thought Lera "got robbed" because I won't do any art with her top fully exposed. So here she is in her Polynesian grass skirt ...

Okay, there was one bit of minor editing so the servers wouldn't boot us out. 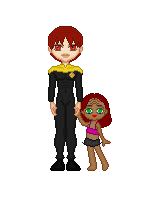 The size differential pictured here suggest she feels there's another reason for Payne's nervousness; he doesn't want to look like he's robbing the cradle.

PG This pic of Alqua Kalina was a little late getting in. Here's his take on Lynx and Tarra. "A variety of different techniques both long used and first try were involved."

For those familiar with Alqua's work, they're just two "sisters," each happy to have found someone like herself.

Lera and Lynx do not exactly get along. Lynx being a tall felinoid, little Lera thinks, "SHE WANTS TO EAT ME!"

So Murray Lee did this take on the situation, slightly edgier than usual for him.

Lera sent this picture months ago. Only recently was it changed to something that could be posted online.