Personal Quote : "Pardon my spelling errors for i'm only a Composer/musician with a 7 letter alphabet"

Personality : With a temper of a Klingon and the passion of a Human, Half-Pipe can be funny, smart, energetic, helpfull, and sometimes a smart-butt. She works hard at everything she does and never gives up. Still living in the past with 20th Century equiptment (laptop, palm pilot, data bank watch, etc.) she finds it hard to adapt in the present.

Background : Half-Pipe, called that because her real name would be impossible to pronounce, is half klingon/half human. She was raised, however by a half human/half vulcan named Sherik, partialy on planet Earth and on a Federation starship. She was brought up with vulcan beliefs and education from both Vulcan and Earth. As a child she raised gerbils, birds and dwarf hamsters, and still raises gerbils today. As a child she showed a great interest in 20th Century Earth history, Vulcan history and sciences. Although she can be quite emotional, she knows the logic of Vulcans and does try to practice it.

Halfpipe had served under the USS Freedom - D , and the E when Treki was in charge, but one day was accidentaly left behind at a Starbase. Rather then taken back to the ship, she was transfered to a military commisarry on Planet K'Mahryt. She served there for three years in various thankless jobs until she was blammed for the disapperance of a ton of haggis. Not knowing her previous position was on the Freedom, her boss decided to punish her by sending her there. For whatever reason, no notice was sent to Captain Payne and Commander t'Resan, her old crewmates now promoted, nor did the shuttle delivering her announce her arrival. So neither knew their old comrade was back until after she had been doused with shapeshifting Junkeskyo water, turning her into a Yorkie, and after numerous attempts to convince them she wasn't just a doggie. Once the situation was settled and Half brought back to normal, she settled back into her old routine.

Apperance: Besides her shorter than normal height, Halfpipe is distinguishable from other hybrid Klingons by her lack of forehead ridges. They were disfigured in an acident durring an away mission, and although most Klingons take pride in their ridges, she decided to simply do away with them instead of reconstructive surgery, "So what if they insult each other saying "your mother has a smooth forehead"? My Mother really did have a smooth forehead. (laugh)" 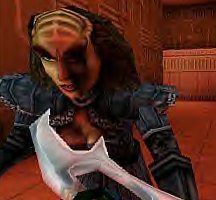 Not sure what she's holding. Looks like some kind of ice guitar.

From "How to Wield a Bat'telh in Six Easy Lessons," money back guarantee if you fail to survive. 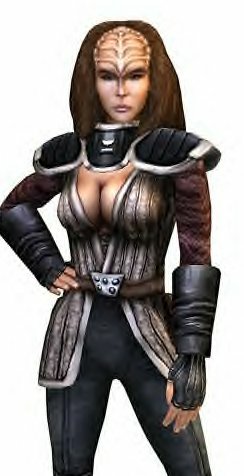 This looks like it was designed by Lera, or perhaps for a Klingon recruiting poster. 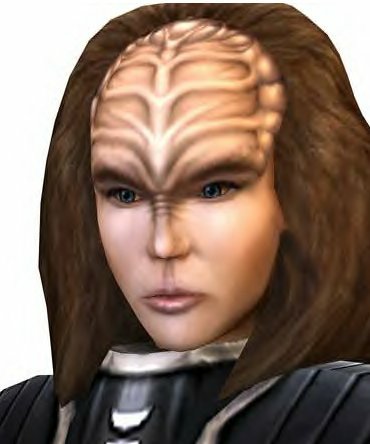 Profile picture, taken after the photographer finally pryed his eyes off the low-cut jacket. 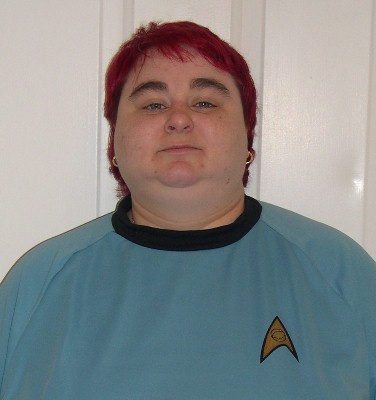 A more recent picture, after the surgery to have her ridges removed. After finding that the old Kirk-era uniforms felt more comfortable to her, she began wearing them at times when off-duty.