Character self-portrait of the second USS Freedom Captain "Treki" Riker, in one of her casual moments. :::wink::: ;-)

Treki described her character as part Betazoid, part Romulan, part Klingon. The running joke was "Does this mean you have three parents?"

And you never knew which third would be the one driving her at the moment. 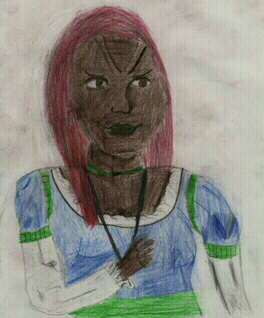 She says she was in a Les Miserables play durring the time of this picture, which would explain why it's actually fit for family viewing. 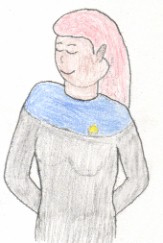 She was still mildly disappointed it wasn't naked. 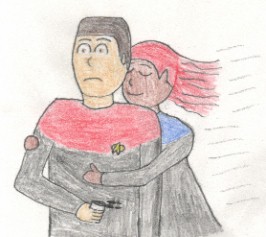 Murray Lee's rendition of Lera giving a *bigsqwishylerahuggle* to the target of her affections (his character).

"Just when you thought it was safe to have a cup of coffee."

Lera's a bit shorter than this (early) artwork suggests. Oh well, she can POUNCE pretty high. 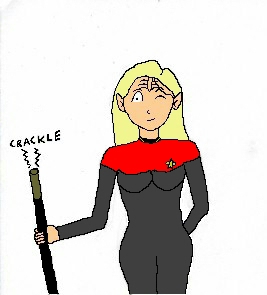 With the player behind Captain Treki only doing a picture of her in "the infamous bikini," Murray Lee took it upon himself to do one of her in uniform, with her "trusty" Klingon painstick.

*Guaranteed to keep off Borg, space pirates, and the occasional drooling fanboy* 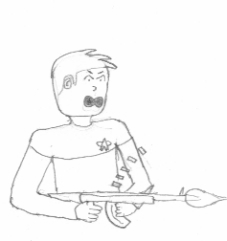 A quick sketch by Murray Lee of one of Captain Treki's more colorful security guards, Kenny.

Kenny's behavior often bordered on psychotic, and when given a choice he armed himself with machine guns over phasers.

As for the running gag, "My name isn't McCormick!" (sp) Nor did he die in every episode. Okay, he disappeared in a few. 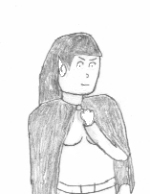 The USS Freedom's "Represenative of the Rommie Nation," Enarrain Ael'vna t'Larva, known as Ael to the crew, drawn by Murray Lee.

"When's Lee going to do naked pictures of Lera?"

She kept asking Murray Lee to do a nude picture, and he eventually agreed to do one as his "10,000 hits" picture, "But I get to choose the scenery."

And here it is ... So why was Lera (and a few others) disapointed?